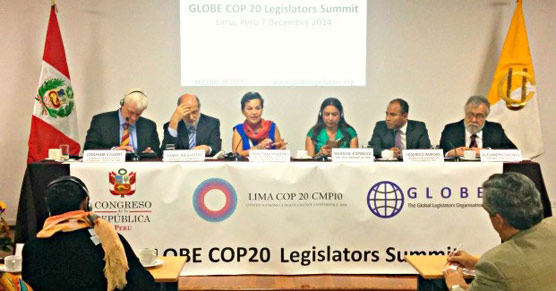 Chairman's Summary by Graham Stuart MP, Chair of the Summit

The GLOBE COP20 Legislators Summit brought together more than 100 legislators and experts from over 30 countries in Lima to give impetus for action on climate change at COP20 and on the road to Paris in 2015. Our Summit took place in the context of the IPPC’s Fifth Assessment Report on the irrefutable threat posed by climate change to our countries, our people and our prospects for peace and prosperity. It took place in the week the World Meteorological Organisation warned that 2014 is on track to be the warmest year since records began in 1850.  And it took place on the day that - 11,000 miles from Lima - Typhoon Hagupit made landfall in the Philippines, leading to 1 million people being evacuated to avoid death and destruction. The largest peacetime evacuation in history according to the UN. 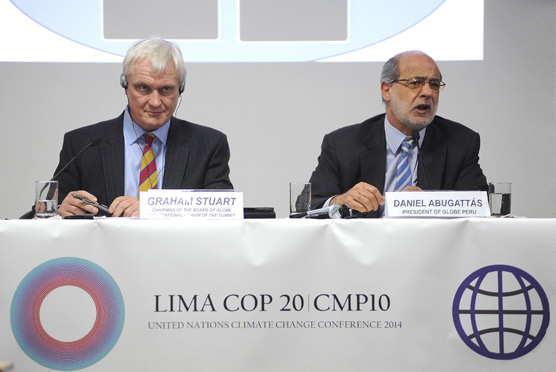 Our Summit came at a definitional time for the global response to the threat of climate change and we heard from many eminent speakers. The COP President, Dr Manuel Pulgar-Vidal, Minister of the Environment for Peru, reminded us that the world was not on track to meet the 2 degree C ‘safe limit’ for global temperature rise. He called for both leadership and pragmatism from political leaders at COP20 creating a ‘Spirit of Lima’ that could infuse the negotiations and provide public confidence that global climate talks could indeed succeed. Christiana Figueres, Executive Secretary of the UNFCCC, laid out a road map for the engagement of parliamentarians emphasising the need for a long-term vision - coupled with clear climate goals and a review process - that could be responsive to the science over time and lead to net-zero emissions or climate neutrality before 2100.

Paul Polman, CEO of Unilever, spoke of the broad consensus within the business community on the need for action on climate change and drew the link to the UN’s post-2015 process on sustainable development goals (SDGs). More than 175 CEOs from the world’s leading companies had attended the UN’s Climate Summit in New York in September 2014 giving their backing to the UN processes on climate and SDGs. Both he and Adnan Amin, Director General of IRENA (International Renewable Energy Agency) spoke of the economic and developmental benefits of investing in renewables and energy efficiency, but emphasised the need for legislative and policy frameworks that could support a transition from fossil fuels to clean energy.

We had an example of this in action when Prakash Javadekar, Minister for the Environment, Forests and Climate Change of India – a GLOBE stalwart and recent President of GLOBE India – chose our Summit to make the announcement that India would introduce comprehensive legislation on climate change at the next budget session of parliament in March 2014.

Dr Jane Ebbinger from the World Bank informed us of impressive developments on the carbon pricing initiative and explained the key conclusions of the Bank’s ‘Turn down the heat’ study on how a 4-6 degree C future must be avoided. Dr Amal-Lee Amin E3G navigated the complex emerging world of climate finance for us and how legislators could engage through their budgetary and review roles.

David Cadman, Secretary-General of ICLEI, put the role of cities into perspective with numerous examples of how intelligent planning, design and partnerships can deliver climate and development benefits.

The presentations were complemented by substantive engagement from legislators, the sharing of experience and good practice, and much networking in the corridors. It is a testament to the quality of the speakers, the conversations generated that and the strength of commitment, that despite many legislators having just arrived, most remained to the end of a long day and were able to endorse key messages emerging from the Summit.

GLOBE Legislators mandated the International Secretariat to organize a series of parliamentary hearings on climate change throughout 2015, anchored in the Intended Nationally-Determined Commitments (INDCs) on climate action to be announced by governments by June 2015. These would cover key aspects of the international climate process including ratification of the Doha Amendment (second commitment period of the Kyoto Protocol) and the need for a long-term goal for emissions reductions, climate finance and a review process.

Reference was also made by speakers and legislators to the three key UN Summit processes converging in 2015 – Disaster Risk Reduction through the UN’s Hyogo Process (Sendai, March 2015); post-2015 sustainable development goals (New York, September 2015) and climate change (Paris, December 2015). Given the interconnections between the three UN summits in 2015, the need for a coherent and integrated approach to all three by the International Secretariat, was recommended, with support extended to GLOBE chapters and membership, resources permitting.

The key role of a strengthened and effective International Secretariat to support and coordinate GLOBE efforts at international, regional and national level was emphasised. The year had seen a leadership transition within, and a restructuring of, the International Secretariat, with the foundations laid for accountability, transparency and energetic engagement on the climate change and sustainable development agenda in 2015.

The Summit closed with a recognition that 2014 had seen strong engagement and leadership by GLOBE chapters, with special thanks extended to GLOBE Mexico and GLOBE Peru, who had hosted respectively the World Summit of Legislators in Mexico City (June) and the GLOBE COP20 Legislators Summit in Lima with support from the Mexican Congress and the Congress of Peru.