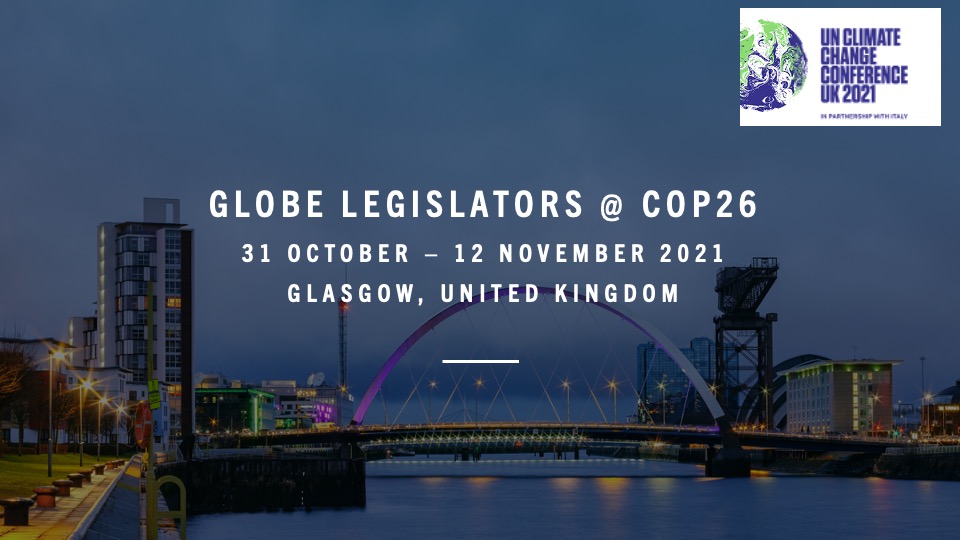 GLOBE International was active at COP26, the major summit of the United Nations Framework Convention on Climate Change (UNFCCC), hosted by the United Kingdom in partnership with Italy, in Glasgow, Scotland (31 October to 12 November 2021). GLOBE was engaged in four principal ways highlighting the key role of legislators in holding governments to account for delivery of the Paris Agreement, exerting legislative leadership in creating ambitious legal frameworks, raising ambition ahead of Glasgow, and seeking to align key international processes such as COP26 and COP15 on biodiversity which are both integral to addressing the joint climate and ecological crises. Gender equality and youth engagement both featured as key themes in GLOBE's work and activities related to COP26.

At COP26, GLOBE hosted the hybrid GLOBE COP26 Legislators Summit from Friday 5 - Saturday 6 November at the Scottish Parliament in Edinburgh. Working in partnership with the Scottish Parliament, this was the principal legislators event at COP26 featuring a high-level line-up of speakers. Due to pandemic restrictions, this was a hybrid event with a limited number of global parliamentarians participating in-person at the Scottish Parliament. An unlimited number of parliamentarians were able to join virtually, however, as digital delegates. They were able to avail of a state-of-the-art video conferencing platform to enhance the online experience. Other stakeholders from local government, civil society, business, academia, etc could also join online as observers.

Ahead of COP26, GLOBE worked with partners to promote dialogue between young people and parliamentarians on how to solve the climate crisis. These took the form of Student-MP Climate Surgeries in London, and across Scotland with MSPs and MPs, on Friday 29 October. Intended as a means of improving political understanding and supporting informed engagement on a critical issue for young people, these dialogues took place across Scotland with the support of Scotland's Children and Youth Parliaments. Billed as 'The Moment', the results of this Scottish youth-parliamentary dialogue were shared at the opening of the GLOBE COP26 Legislators Summit on Friday 5th November 2021.

As Focal Point, GLOBE provided regular updates and hosted a series of webinars and information sessions on the road to and post-COP26 and supported cross-party parliamentary engagement at COP26.

The Parliamentary Group is open to parliamentarians, parliamentary networks or organisations seeking to advance the aims of the UNFCCC and implementation of the Paris Agreement.

COP26 HIGH LEVEL STATEMENT ON BEHALF OF THE PARLIAMENTARY GROUP

Watch the speech here in English - also available with Spanish and French subtitles.