GLOBE International was founded by cross-party legislators from the US Congress, European Parliament, Japanese Diet and the Russian State Duma in September 1991 to enable parliamentarians to have a voice at the landmark UN Earth Summit in Brazil in June 1992. In the United Nations member state system, only the executive (national government) are represented and elected members of parliament are considered as ‘non-state’ actors, as are members of the judiciary, the third branch of government. 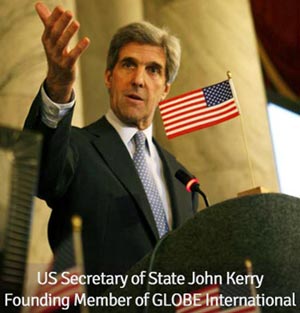 GLOBE legislators were involved with the Rio Earth Summit, formally known as the the UN Conference on Environment & Development (UNCED) in 1992, and in  subsequent UN summits during the 1990s. In the post-Kyoto (1997-) period of international climate summits, GLOBE members increasingly focussed on climate change and the need for industrialised countries to take the lead in reducing greenhouse gas emissions. GLOBE national chapters grew in a number of countries and across the European region. GLOBE chapters in national parliaments were instrumental in the design and advancement of legislation on issues ranging from pollution, water, clean energy and oceans. These efforts laid the basis for a now extensive architecture of global climate change legislation.

GLOBE International was established as a non-profit international association registered in Brussels, Belgium, in 1992. In the early 1990s, the GLOBE network operated primarily from its international secretariat in Brussels and for a few short years in Chicago and Washington D.C. During this period members engaged actively in the series of UN summits, including the Cairo Summit on Population and Development and the UN Framework Convention on Climate Change in Kyoto, Japan.

The mid-2000's marked a new phase in GLOBE's development and expansion. With support from the UK government, a cross-party group of UK parliamentarians formed a new local entity, The Global Legislators Organisation (GLOBE) Ltd, which provided secretariat services to the GLOBE International network of legislators until the collapse of the UK-based GLOBE Ltd in late-2014.

In 2005, during Tony Blair's premiership in the UK, GLOBE was invited as the only non-governmental body to participate in the G8 Ministerial Dialogue on Climate Change hosted by the UK. At this G8, GLOBE brought together legislators from all major political parties within the parliaments of the G8, European Parliament, Brazil, China, India, Mexico & South Africa. This began a new phase of increasing international legislative dialogue on climate change. Subsequently, GLOBE Legislators Forums were created to bring together groups of around 100 bi-partisan legislators twice a year from the G8+5 group of countries. A resulting series of policy dialogues were held in the US Senate, the UK House of Commons, the Brazilian Senate, the German Bundestag, the Japanese Diet, the Italian Chamber of Deputies and Senate, and the Danish Parliament, the Folketing.

The new stage of expansion began with the G8+5 legislators dialogue on climate change in Tokyo in June 2008, which ended with a consensus agreement between one hundred senior legislators on Lord Michael Jay’s Post-2012 framework paper. The Tokyo summit expanded GLOBE's activities to the G20 group of countries and increased the range of policy areas to be covered. For the first time GLOBE formed international Policy Commissions – the international Commissions on Climate & Energy Security chaired by US Congressman Ed Markey, and on Land Use Change & Ecosystems chaired by Barry Gardiner MP of the UK and Senator Renato Casagrande of Brazil.

The Land Use Change and Ecosystems Commission, supported by the Global Environment Facility (GEF) and the United Nations Environment Programme (UNEP) developed a set of forestry and terrestrial carbon position papers that were adopted at the GLOBE Copenhagen Legislators Forum, hosted by the Danish Folketing in November 2009 in parallel to UN Framework Convention on Climate Change (UNFCCC) COP15. These papers served to support development of specific legislative proposals on forestry and payments for ecosystem services. The Climate & Energy Security Commission produced a set of principles to guide national legislation that were formally presented to the GLOBE Copenhagen Legislators Forum by US Congressman Es Markey and Chinese Congressman Wang. The Forum adopted the principles and the participating legislators and national GLOBE Chapters agreed to advance them through legislation within their respective national parliaments.

The third phase of GLOBE's development began in 2010 following the Copenhagen Legislators Forum, when direct support to national GLOBE chapters started to be provided to advance national legislation. Legislators decided to take part in international summits to share best practice and present national case studies. A policy programme focusing on the advancement of environmental economic accounting was launched in a summit held in the German Bundestag in June 2013. During this period, GLOBE also began organising annual summits to coincide with the UNFCCC's Conference of Parties. These annual GLOBE summits were typically hosted by the national parliament of the COP host country, and afforded an opportunity for legislators from around the world to engage on themes related to the UNFCCC sessions. 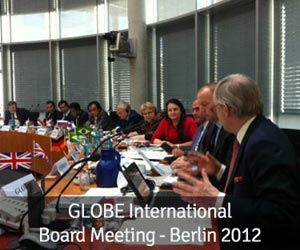 GLOBE, with the support of member legislators, had also begun producing an annual report monitoring global legislation on climate change. Since 2015, this has been produced as an on-line resource by the Grantham Research Institute on Energy & Climate Change, and now provides the most comprehensive source of information on global climate change laws.

In 2014, the GLOBE International network was dealt a major blow when the UK company providing secretariat services, The Global Legislators Organisation (GLOBE) Ltd., suffered a serious financial collapse leaving numerous creditors following a major World Summit of Legislators in Mexico in June 2014. Officials at GLOBE Ltd filed for liquidation and the company was declared bankrupt by the UK authorities.

The GLOBE International network of parliamentarians appointed fresh leadership after the collapse of GLOBE Ltd in 2014 to address institutional weaknesses and rebuild the network. By 2015 a new secretariat with a fresh team was established based in Brussels, Belgium, to refresh the organisation and take forward a new programme of work.

2015 was a landmark year for international summitry and the new GLOBE secretariat established new programmes of work linked to the 2030 Agenda on sustainable development GLOBE International concluded the year with a highly successful summit at the National Assembly in Paris during the UNFCCC COP21 talks, integrating the climate agenda with that of the other major UN summits of the year.

2015 had seen a succession of agenda-setting United Nations summits on disaster risk reduction (Sendai, March); financing for development (Addis Ababa, July); the post-2015 sustainable development goals (New York, September) and climate change (Paris, December). The implications of these summits is of particular relevance for legislators and GLOBE International adopted a unique approach calling for ‘Coherence and Convergence’ in policy articulation of these inter-related summit outcomes.

The GLOBE International network, supported by the new secretariat, is presently working with partners such as UNEP, UNISDR, GEF, the Asian Development Bank and national parliaments to help deliver the outcomes of these summits and forge imaginative new partnerships.
With the support of the ADB and the World Commission on Environmental Law, GLOBE International has initiated innovative dialogues between legislators and the judiciary on climate change and environmental laws to aid mutual understanding.

The London Climate Action Week 2019 provided a unique opportunity for GLOBE to explore the links between climate legislation and climate litigation with high-level events at the UK Supreme Court, House of Commons and London School of Economics, as well as pioneering new initiatives with young people in the wake of the school strikes and climate activism by newly-politicised young people.

GLOBE's current work also encompasses new initiatives on electro-mobility, REDD+ and natural capital governance towards the delivery of the 2030 Agenda and the Sustainable Development Goals. GLOBE's work on REDD+ readiness and natural capital governance for the delivery of climate and sustainable development objectives has developed into a specific programme currently working with parliamentarians in the Democratic Republic of Congo (DRC), Nigeria and Senegal with the support of the Global Environment Facility (GEF).

Since 2020 GLOBE International has been developing new programmes examining the implications of governance failure, rising authoritarianism, attacks on democracy and constitutional freedoms, and a collapse in trust in institutions (including parliaments) for the role of independent parliaments and a responsive politics to the climate and planetary emergencies. GLOBE International is also developing a new model of parliamentary engagement through a new service-based GLOBE fellowship programme.

Working with young people to enhance political education and literacy, and support a new generation of democratic leaders and engaged citizenship, is another major new programme area.