Bertrand Pancher has been deputy for the Meuse since 2007 and Secretary of the Commission for Sustainable Development and Town and Country Planning. Mayor of Bar-le-Duc from 1995 to 2001 (when he was elected President of the Meuse Departmental Council), he was re-elected to this post in 2014 and resigned following his re-election to the National Assembly. He is now a member of Bar-le-Duc Municipal Council and of the Meuse Grand Sud Urban Community.

Bertrand Pancher has specialised in environmental issues and sustainable development since his first mandate as a deputy. He took part in the preparatory work for the Grenelle Environment Round Table as a member of Group V: "Building an ecological democracy". He was also co-rapporteur of the "Grenelle II" bill and author of a report on "La Concertation au service de la démocratie environnementale" ( "Concertation at the service of environmental democracy").

At the same time, he specialised in the field of transport. He was a member of the Mobility 21 Commission - aimed at drawing up a long-term transport infrastructure policy -, a member of the information mission on eco-taxes and, in 2014, chaired the information mission on the place of motorways in transport infrastructures. In the same year he wrote, with his colleague Gilles Savary, an information report on the implementation of the law of 4 August 2014 on railway reform.

A few months ago he was entrusted by the Minister of Transport Elisabeth Borne with the chairmanship of one of the 6 working groups set up on the occasion of the National Conference on Mobility: the group on "more connected mobility".

Alongside his political commitment, Bertrand Pancher is founder and President of the Association "Décider Ensemble", a cross-party think tank specialising in governance and consultation. He also co-chairs the "Bilan Carbone" ("Carbon Balance") association. 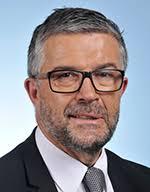