The launch of the Study ‘Identifying Synergies for Forest Reform in Colombia’ at a half-day parliamentary Forum was held at the Boyacá Hall of the Colombian Congress on 4 April 2017. The event provided an opportunity to promote the exchange of national experiences between Mexican and Colombian legislators on forest governance to meet biodiversity, climate change and sustainable development objectives, whilst emphasizing the importance of recognizing collective rights at the moment when the national peace process in Colombia has opened up opportunities for fresh thinking and for the comprehensive update of forest and rural communities’ governance. 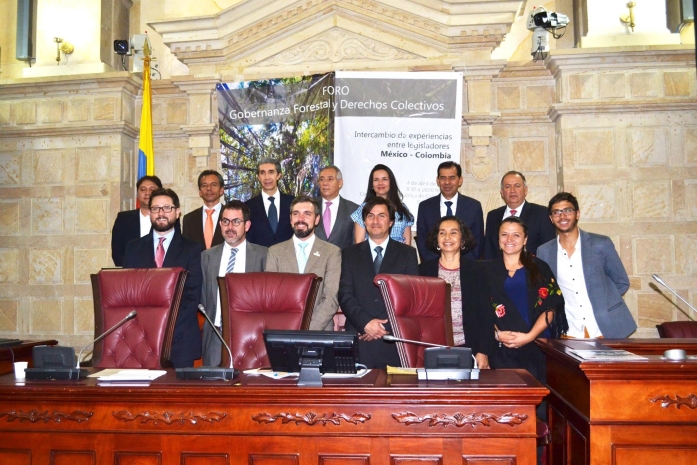 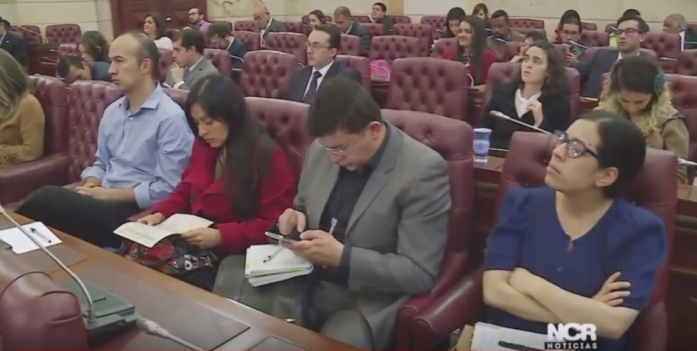 In his inaugural address, the President of the Congress of Colombia Dr. Oscar Mauricio Lizcano Arango, stated: ‘At present, a number of countries are reviewing their forest governance frameworks to address the complexity arising from the concurrent, interconnected and sometimes conflicting objectives of biodiversity conservation, mitigation and adaptation to climate change, sustainable development and the recognition of the ancestral rights of indigenous peoples over their territories. (…) The official launch of the Colombian Study today brings together parliamentarians, representatives of Ministries and relevant government agencies, academics and research centers, civil society and the private sector to discuss the Study's recommendations and identify priority areas for reform.’

The 45-page Study is available in Spanish only 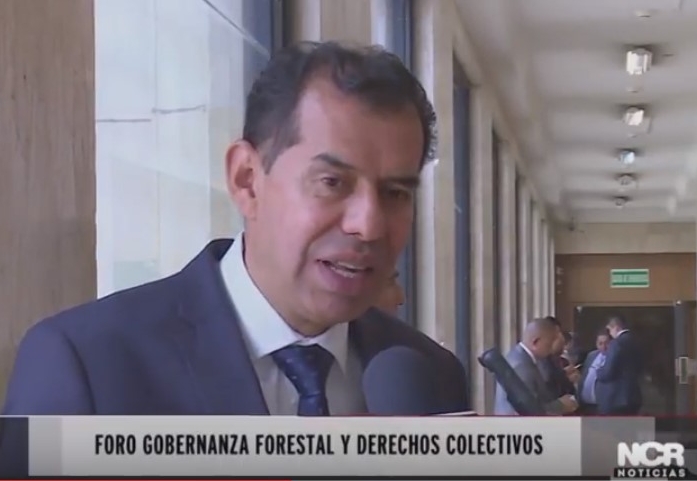 Dr. Mauricio Umaña started his presentation as the leading author of the Study with a brief description of the country's forest governance framework under the focus of international commitments and the national political-institutional setup. He then presented an analysis of the strengths and weaknesses of the regulatory and institutional framework for progress towards a forest governance setup conducive to the coherent fulfillment of the multiple national objectives on forests and biodiversity. The National Forestry Development Plan of 2000 was characterized as a clear success, although there is no data to assess its progress except for the year 2010. The National Forest Development Plan (PNDF) offers a strategic vision of the national forest management for the next 25 years, transcending periods of government as a State policy. 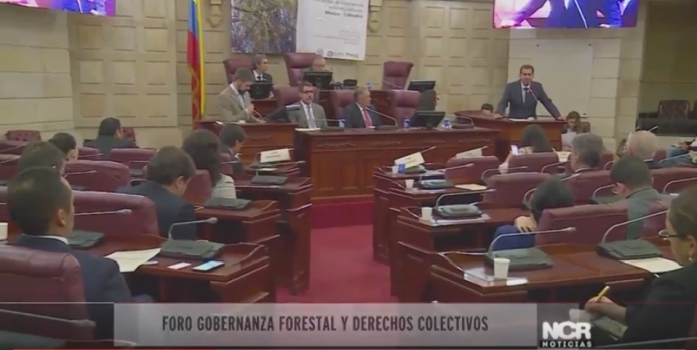 Dr. Umaña pointed out that one of the most important challenges is the lack of information about the illegal use of forests. It is estimated that 42% of the natural timber that is traded in Colombia is of illegal origin. The National Forest Information System (SNIF), does not have sufficient coordination capacity (e.g. online procedures and real-time compilation) on forest use permits and the mobilization of their products, making the monitoring and the information of the forest uses very difficult. The lack of knowledge on populations and densities of high-value forest species also makes the monitoring of forest use difficult. It is evident that there is a lack of forest information in the country. Furthermore, specific normative advances in the forestry sector are scarce and the proposed zoning for forest reserve areas does not accommodate the social realities of the territories.

At the same time, legal uncertainty on how to intervene and develop social policies and actions with forest dwellers in the forest reserve areas of the country has historically marginalized these areas and therefore deepened inequality. Dr. Umaña stressed that institutional strengthening is needed in the development of forestry governance functions, which are described under a coherent but difficult to meet framework due to human, economic and technical constraints.

The Study argues that the main challenges for good forest governance in the country can be divided into three interconnected groups: i) the current forest use regime; ii) the inadequate participation of forest dwellers in their management and; iii) the lack of zoning and governance of sectoral frontiers (agriculture and mining-hydrocarbons).

The current forest use regime

The current regime is regulated by Law 2 of 1959, the National Code on Renewable Natural Resources, Law 99 of 1993 and Decree 1791 of 1996. This regulatory framework does not establish minimum principles and requirements guaranteeing the sustainable use of forests. Furthermore, it does not foresee capacity building nor budgetary resources for the environmental authorities in charge of exerting oversight on forest use, which, together with the challenges posed by the notorious public order problems in the country and the lack of an effective mechanism for monitoring and sanctioning, has resulted in a high level of informality and illegality in the exploitation of forests and the commercialization of forest products.

The inadequate participation of forest dwellers in forest management

Under the current natural forests value chain scheme there is an evident inequity in the extent to which benefits from natural forest use flow towards forest inhabitants-producers when compared to the flow towards the intermediaries and the final links of the value chain. The 2nd Law on Forest Reserves and its current regulations do not generate a clear and concise mechanism so that dwellers in the forest reserves established under the 2nd Law can be included in the different benefit programs managed by the Colombian State, which in turn does not incentivize them to implement sustainable forest management. This explains why processes of consolidation of natural forest value chains in which forest-dwelling communities participate at every link of the chain are few or non-existent in Colombia.

The lack of an up-to-date rural land registry fosters land use change for agricultural purposes to the detriment of natural ecosystems, particularly forests. It also facilitates informal and illegal mining, which keeps on increasing unchecked and undermines the integrity of natural forests, with an impact on their dwellers.

The weaknesses above could be addressed in the framework of Law 1753 of 2015 establishing the National Development Plan, as Art. 170 and Art. 171 mandate the development of a long-term Green Growth Policy and the adoption of policies to avoid deforestation by 2030 respectively.

Colombia’s successes delivering on international agreements provide a platform for further progress. The Convention on Biological Diversity (CBD) and the implementation of the Aichi Targets have driven the establishment of new protected areas. The REDD+ mechanism has also driven the planning and effective launch of a process to avoid deforestation and improve forest management with direct interventions in the territories unprecedented in the Colombian Amazon basin. The FLEGT (Forest Law Enforcement, Governance and Trade) process in partnership with the European Union to strengthen the legality, traceability and control of timber from natural forests has also driven progress.

The development of the Action Plan of the National Biodiversity Policy and the Integrated Management of Ecosystem Services (Plan de Acción de la Política Nacional de Biodiversidad y Gestión Integral de sus Servicios Ecosistémicos – PNGIBSE) could translate the conceptual framework of the policy into concrete actions advancing sustainable forest management in Colombia, alongside i) the National Forest Inventory as a fundamental tool to build knowledge on the natural capital of Colombian forests and its current and future state; ii) the Forest and Carbon Monitoring System, which is the main tool to monitor forest cover and areas suffering deforestation, and iii) the Cross-Sectoral Agreement for Legal Timber as a voluntary tool to monitor and control the value chain in natural forests. In addition, a bill and a 'CONPES' document by the National Council for Economic and Social Policy, Colombia’s highest national planning authority advising the Government (‘Consejo Nacional de Política Económica y Social — CONPES) on the adoption and implementation of payments for environmental services are under parliamentary scrutiny at the moment.

All these processes may make major contributions to improving forest governance and enable a fair benefit-sharing for forest dwellers. However, it is required that their successes benefit from institutional and legislative consolidation through a national integrated forest policy, which ought to catalyze and/or drive the updating of the forest use regime based on sustainable forest management and the fair participation of forest dwellers.

On this note, the Study referred to the recommendations of the Forum Forests and Peace-Building, a Post-Conflict Opportunity (‘Bosques y Construcción de Paz, una Oportunidad para el Posconflicto’) https://europa.eu/capacity4dev/public-flegt/blog/s%C3%ADntesis-foro-bosques-y-construcci%C3%B3n-de-paz-una-oportunidad-para-el-posconflicto, held in August 2015 in Bogota under the auspices of the European Union Delegation in Colombia, the Colombian Government and the environmental authority of the Risaralda region (‘Corporación Autónoma Regional de Risaralda’): 1) integrating forests in the new Integrated Rural Development Scheme; 2) including forest-dwelling communities in the peace consolidation process; 3) updating forest use rules to make them easy to enforce at local level; 4) abandoning the paradigm that forests cannot be exploited sustainably; 5) updating the approach to forest management of regional environmental authorities (‘Corporaciones Autónomas Regionales’); 6) working with all stakeholders in forest areas to consolidate peace; 7) improving the effectiveness and coherence of international cooperation by generating processes of prioritization of interventions and investments in the country.