Member of the Climate Change Committee, House of Representatives, Nigeria

Honourable Samuel Ifeanyi Onuigbo was born on October 1st in Umuahia, Abia State into a family from Obuohia, Obi-Ibere, Ikwuano Local Government Area of Abia State, Nigeria. He is a Nigerian politician and the member representing Ikwuano/Umuahia North and South Federal Constituency at the House of Representatives.

Honourable Onuigbo attended Alvan Ikoku College of Education, Owerri, Imo State where he obtained a National Certificate of Education in 1983. He further earned a Diploma in Law from the University of Lagos and a Master’s in Business Administration from Enugu State University of Science and Technology, Enugu.

At the National level, he was Special Adviser, Public Affairs, Office of the Speaker, House of Representatives, National Assembly, Abuja. At the State level, he was the Hon. Commissioner, Ministry of Lands and Survey; the immediate past Commissioner for Finance; a former Board Member, International Glass Industries Limited, Aba. In each case, you can easily note his track records of achievements which is an eloquent testimony to the fact that Chief Onuigbo is a disciplined and tested professional who is focused, result oriented and of sound mind.

Since 2015 he has been the member representing Ikwuano/Umuahia North and South Federal Constituency at the House of Representatives under the People's Democratic Party. He is the Chairman, House of Representatives Committee on Climate Change. His legislative interests include education, creation of employment for the youths, prudent management of human and environmental resources.

Honourable Onuigbo is a devout Christian and committed community leader. He is married with children.

Awards
Honourable Onuigbo was bestowed with the award of Okeosisi of Ikwuano by Ikwuano Development Union in 2001.
He is a recipient of the Professional and Vocational Service Awards from Rotary club International.
He holds the award of Honour from the Forum of Commissioners of Finance of Nigeria.

He also has several long service awards from the U.S. Department of State and Letters of Commendation from two former US Ambassadors to Nigeria.

He holds two traditional titles; (i) Odozi Obodo I of Ugwu-Ibere Ancient Kingdom; and (ii) Ebubedike I of Otu Uzo Autonomous Community. 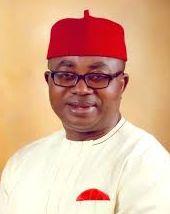